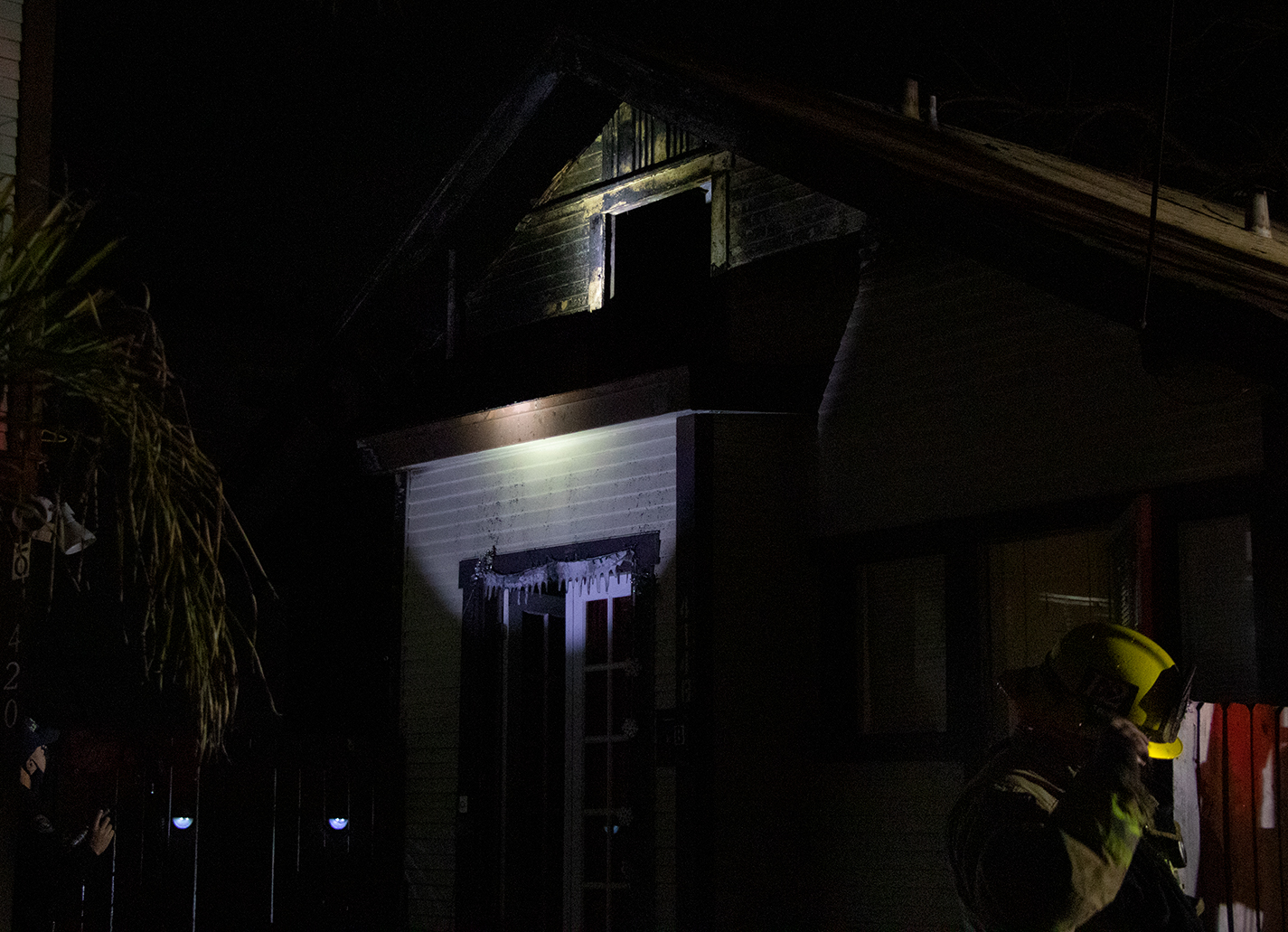 Fire investigators arrived on scene to inspect a fire at a residential structure on Walnut Avenue and Fourth Street in Long Beach on Sunday, Feb. 21, 2021. Photo by Crystal Niebla.

Firefighters extinguished  a blaze that burned through what appeared to be an attic and cut the power of a shared residential structure in the North Alamitos Beach neighborhood in Long Beach Sunday night.

At around 5:30 p.m., an outdoor patio tent fire spread to an adjacent roof of the home on Walnut Avenue and Fourth Street, said Brian Fisk, spokesman for the Long Beach Fire Department.

No injuries were reported.

Long Beach police arrived on scene for traffic and crowd control, having closed Fourth Street between Walnut and Nebraska avenues for over an hour.

Because the fire is still under investigation, Fisk said that he could not speak more about the cause of the tent fire.

Resident John Patrick Ryan IV, 52, said he saw a Mylar balloon hit the street wires, causing a loud explosion while he was sitting on a bench outside in the front yard.

“I could feel the heat from it,” he said.

Ryan said that one of his neighbors had an outdoor leisure space made out of tarps with chairs and couches that they’d use for watching movies outside, all of which then caught on fire.

The flame grew to about 6- to 8-feet high, Ryan said, and then “reached the eaves of the house.”

He ran to grab a hose and tried to put out the fire. Another neighbor brought a fire extinguisher, he said.

He said he and his neighbors and friends helped to keep the fire low until the fire department arrived.

Sergio Lopez, 35, who lives in an apartment on the side of the structure that caught fire, said he found a burned Spider-Man balloon by his home on a base of plants and he smelled burned plastic. When he saw the fire, he said he also tried to put it out with a garden hose.

Lopez said he felt that he and his family were in danger, with the winds causing the flames to surge.

“It was picking up quick,” he said. “… I can’t believe it happened in less than five minutes.”

Lopez pointed up to the remnants of what appeared to be a red Mylar balloon stuck on a street wire. He said one of his daughters felt scared, as she clung close to him.

Another neighbor, Hadalberto Jauregui, 40, was out picking up his son from his mother’s home when the fire started. “I came home to this,” he said, adding that he, his son and fiancee will likely stay at his mother’s tonight.

Ryan said that his home is habitable and he will be sleeping there tonight, but he, his partner, her daughter and her two pets are without power.

“My Harley was far away enough from the fire, so at least I didn’t have to worry about that,” he said.