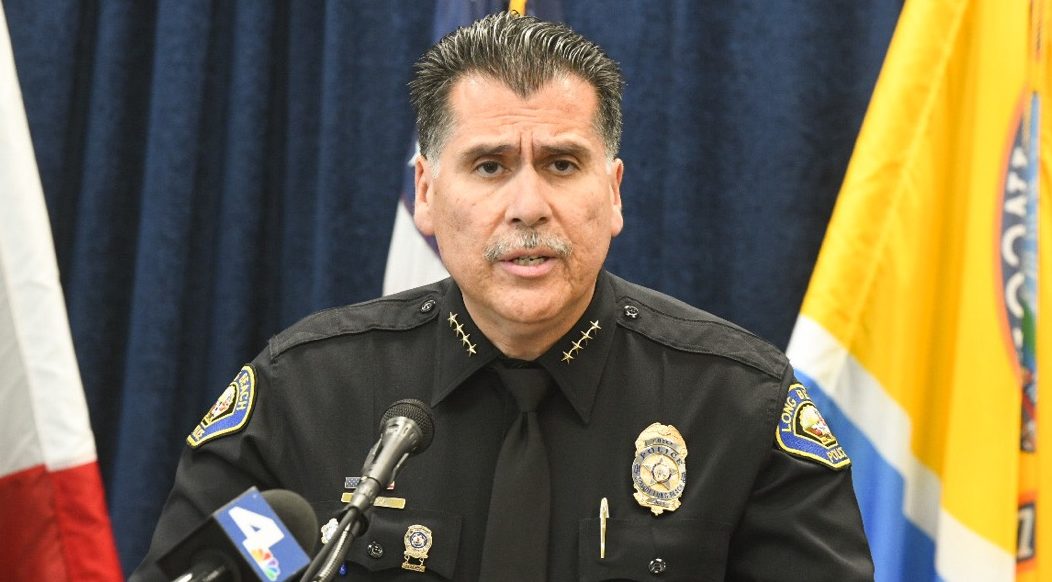 Long Beach Police Chief Robert Luna is expected to declare his candidacy for next year’s Los Angeles County Sheriff’s race at a news conference this week, according to multiple sources aware of the situation.

Luna had announced in September that he was retiring from the LBPD at the end of 2021 after over 36 years of service in Long Beach, including seven years as chief of police. Luna will be joining an already crowded field in the 2022 sheriff’s race, and the number of candidates is expected to grow.

Incumbent Sheriff Alex Villanueva, who has spent the last four years feuding with the media and the LA County Board of Supervisors, will be on the ticket as well as at least seven others, according to the LA County Registrar-Recorder/County Clerk records.

Multiple sources who asked not to be named confirmed to the Post that they were familiar with Luna’s pending announcement, but they declined to comment on the record. They said Luna would be entering the race with an announcement likely to come during a Wednesday press conference. A domain name for a Luna for sheriff campaign website was created on Nov. 24.

Luna did not immediately respond to a request for comment Monday evening.

Villaneuva was elected sheriff in a huge upset in 2018 over former Long Beach Police Chief Jim McDonnell, who had served as chief in Long Beach for five years. When McDonnell first won office in 2014, he gave Luna high praise, saying he could not think of “a better or more qualified person to lead the LBPD.”

Luna would be pursuing a political office for the first time in his career and would be overseeing over 12 times the amount of sworn officers he does currently. Long Beach has just over 800 sworn officers and about 1,200 total employees while the sheriff’s department has nearly 11,000 deputies and about 18,000 employees.

Luna entered law enforcement as a reserve officer in 1985, and spent his entire career in Long Beach. He has a master’s degree in public administration from Cal State Long Beach. Luna serves as a board member for the influential Major Cities Chief’s Association.

Unlike Villanueva’s relationship with the county board of supervisors, Luna has avoided public clashes with the Long Beach City Council and has received wide support during his tenure.

Former Long Beach Councilwoman Jeannine Pearce, who briefly worked on the Villanueva campaign in 2018, was one of the few leaders critical of the LBPD and Luna during her one term on the council. On Monday, she said there needs to be a new sheriff but that Luna was not the person that should lead the county in this moment.

“I’ve never felt Luna has been held accountable or brought transparency to our police department,” Pearce said. “He’s not right for the city we’ve become and you could say the same for the county.”

Pearce said news of Luna’s pending announcement had been circulating for a few weeks.

During Luna’s tenure, Long Beach police saw a decrease in police shootings and use-of-force incidents. However, while the department has instituted a number of reforms in recent years, including a focus on officers’ mental health under Luna’s leadership, the department has been criticized for not leading on those issues.

In one example, LBPD leadership instructed its officers to stop using the carotid hold in June 2020, shortly after the murder of George Floyd. However, most California police departments had stopped using the controversial technique well before Long Beach.

One candidate in the crowded field could already have a leg up even though the nomination period doesn’t close until March.

Sergio Carillo, a political consultant who also has endorsed Rhambo, said that Rhambo is highly qualified and has already done a lot of leg work by reaching out to delegates and getting his campaign underway. Carillo said the Democratic party is focused on ousting Villanueva but it’s going to be important for the party to rally around a single candidate.

“We need someone who can get the Democratic party endorsement,” Carillo said. “The only person that I think can do that right now is Cecil Rhambo.”

Javier Gonzalez, Villanueva’s campaign director, said Luna is no different than Rhambo or any of the other declared candidates.

“They’re all auditioning for the part of David among the wealthy friends of the Board of Supervisors,” he said. “They’re frantically trying to find David to take on Goliath. They’re all one group of people who think they can cash in for themselves