News & Events
You are here: Home1 / About Us2 / News & Events3 / Bulletins4 / Retirement of their first search and rescue Canine

The City of Long Beach Fire Department announced today the retirement of their first search and rescue Canine. The dog, a Black Labrador Retriever named “Rex” has faithfully served the City of Long Beach, the State of California, and the Country for the last 11 years. “Rex” was placed with his handler, Fire Captain Wade Haller on June 9, 2009. Since then, Rex has been “on-call” to respond to any major disaster throughout the United States. In September of 2017, “Rex” was deployed to Texas in support of Hurricane Harvey. In January of 2018, “Rex” searched the areas in and around the devastating mud flows of Montecito after the Thomas Fire. 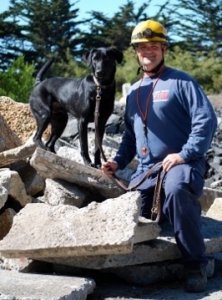